Somehow made it through this week!

I haven't been keeping up with my session reports, and it seems like doing that would be a much better use of my time, lol, but my "school" filled with (checks notes) "roach goblins, bees, and robots" is chugging along.

This week, I pretend the school has a robust technical program and space for some arts.  Every school I've worked at has had a daycare run by students learning child development so that is here too.

I still think of this as a more post apocalyptic gonzo thing, something I wouldn't necessarily run with d-n-d, but with something that has mutations, psychic powers, and also magic.

I've taken my own advice and decided that these "seven room regions" will now be occupied primarily by one type of entity, which if I was running the game would appear on a 1-3 on the encounter die, and on a 4-5 a creature from a neighboring area would show up, and on a 6 something from the next level down would show up.

At some point I'll start thinking about treasure, but since this ain't d-n-d I can more conveniently focus on interesting items/equipment, rather than piles of coins... if I decide to!

I am still writing these as quickly and as simply as I can.  I have a 2 year old so it is a miracle I get even these small notes done. 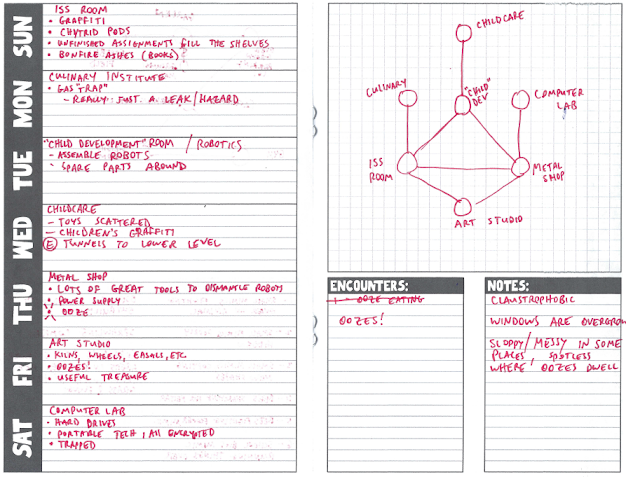 Popular posts from this blog

- April 28, 2022
Session Notes (04/23/22) Game : Mothership Homebrew Module : Co-Location Players : 3 I had a chance to play online with some friends and run a homebrewed Mothership module Characters : Lee, Scientist, “Biohazard” patch and flint hatchet trinket Minami, Teamster, “Drink, Fight, F**k” patch and golf club trinket Sizix, Android, “Do You Sign My Paychecks?” patch and Shiv carved from butter knife trinket Session : We started by reviewing the safety notes in the WIP rulebook for Mothership, and I pre-emptively “X’ed out” my usual suspects (sexual situations & torture).  We rolled up characters following the 1st edition rules right after, and began playing within about 15-20 minutes of starting. The mission brief: The Yoyodyne* Conglomeration has hired you to retrieve a valuable experimental technological prototype stored on one of their ships, The Anubis.  Unfortunately the ship has suffered an accident, and the prototype is still on board.  The Anubis is in the San Narciso system.  Tr
Read more Session Notes (08/14/22) Game : Mythic Bastionland Module : n/a or maybe "& The Order" Players : 4 Moving from the midwest to the east coast took a long time, but I was super happy to sit down and play online.  We played the most recent Mythic Bastionland playtest. Characters : Brya, the Moss Knight Yaw the Bull, the Tourney Knight Harold, the Snare Knight Sanguine, the Bloody Knight Session : After 10 minutes of character creation, we discussed “start” and “scope” from the book, and settled on Petty and Open. The knights were introduced to the Domain: And told that they were seeking Castle Achnam, the seat of power in the domain, where they would find powerful seers, and hospitality from the king. They approached from the west, and found a great forest.  In a sunlit clearing, they saw a vassal, holding a pitchfork, keeping a wild horse at bay.  He shouted in his commoner’s tongue for help. The four knights cautiously approached and spent some time observing.  Brya spoke
Read more 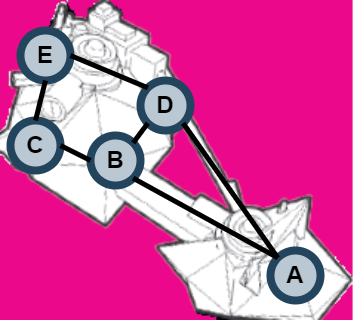 Session Notes (05/08/22) Game : Mothership Module : The Danse Macabre (Homebrew) Players : 3 After some discussion about how we want to play mothership, we settled on an “anthology” style though it might dip in and out of narrative depending on how we feel. Characters : Lee, Engineer, “Biohazard” patch, and flint hatchet trinket, high score 1 Marli, Planetologist, “SUCK IT UP” patch, and DNR beacon trinket, high score 0 Antheridium 420 (Anthony), Android, “Plays well with others” patch, and calendar of military battles trinket, high score 0 Session : Lee’s new crew picked up the following mission: The moon Katje V was set up by the Paxton-Vibe Corporation to grow grain products (rye, bread, whiskey, etc.) and cattle inside an agricultural station (Callsign “Control 13”).  The latest cargo ship did not return, and there are no responses via long range comms.  It is suspected that a disaster of some kind has occurred, ceasing production.  You must go to the station, and find out what has
Read more